About the Gould Lecture Series

The William R. and Erlyn J. Gould Distinguished Lecture on Technology and the Quality of Life was inaugurated October 7, 1992, at the University of Utah Marriott Library.

In establishing the lecture series, Bill and Erlyn Gould both recognized the critical need for continuing public education about issues regarding modern technology and its impact on our daily lives.

Inherent to the advantage of technology is the importance of understanding the ramifications and responsibilities that accompany modern scientific discovery. Only through continuing public education can scientific fact and social philosophy be successfully merged.

The lecture series is intended to provide a forum for the discussion of problems, issues, experiences, and successful case histories of the regeneration and preservation of our communities through the application of modern technology.

It is hoped that an increased awareness of obligation in the public trust will emerge among practitioners of technology as they address the very important environmental and life-deteriorating problems facing society today.

Through interaction between technologists and opinion leaders in communities that are the benefactors of their efforts, a synergism can develop through which society may see great benefit in the long-term future.

With the lecture series, it is intended that a dialogue be opened between the technologist, the philosopher, the humanist, the private citizen, and all who may wish to assert an active voice in our collective future.

In such an atmosphere of mutual interest and understanding, no one group will be singled out for exclusion or blame for society's ills; rather, through understanding, discourse, and public education the positive direction of our future may be shaped.

The Marriott Library's mission is to provide information in all formats sufficient to support the scholarship, teaching, and research programs of the University of Utah to its students and faculty, and to the citizens of the state.

In this light, the annual lecture will strive toward providing a greater public understanding of technology and the social potential that can be cultivated.

In conjunction with the Utah Science, Engineering, and Medical Archives program of the Marriott Library, the lecture series will provide the means of bridging the many disciplines of technology while meeting the needs of the public in understanding its rich and diverse technological heritage. 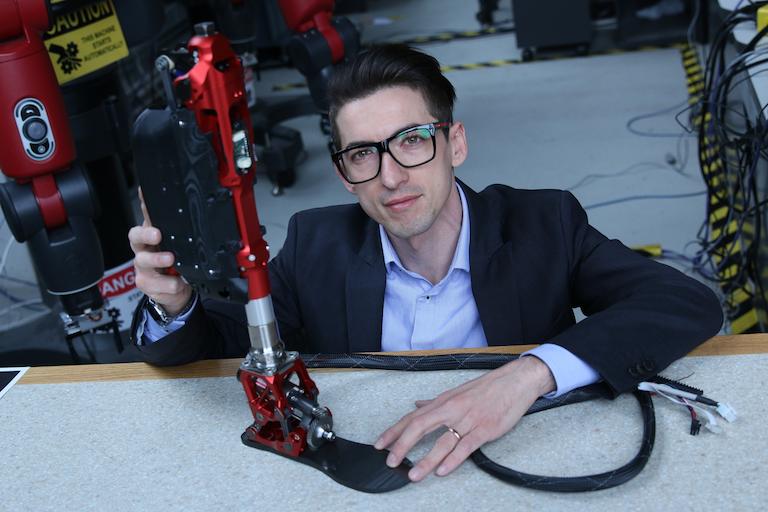 Imagine a world where everyone can move and live independently. A world where congenital defects, trauma, and injury would not prevent people from pursuing their life goals. Imagine if advanced bionic technologies could enhance the human body -- restoring, preserving, and augmenting the human movement ability across the lifespan.

For Professor Tommaso Lenzi and his team at the Utah Robotics Center, this is the vision that drives their research. Working at the intersection of Robotics, Design, Control, Biomechanics, and Neural Engineering, they hope to end physical disability by developing the next generation of wearable bionic devices and systems to help people move and live independently.

Professor Lenzi received a master’s degree from the University of Pisa in 2008, and a PhD degree in BioRobotics from Scuola Superiore Sant’Anna in 2012. More recently, he was a research scientist at the Center for Bionic Medicine of the Rehabilitation Institute of Chicago where he worked with an interdisciplinary team of engineers and clinicians focusing on translational science. Professor Lenzi is currently an Assistant Professor in the Department of Mechanical Engineering here at the University of Utah, and a Core Faculty member in the Utah Robotics Center. Prior to joining the U, he was a Research Scientist at the Rehabilitation Institute of Chicago (2015-2016), and a Postdoctoral Fellow at Northwestern University (2013-2014).

Dr. Lenzi is a member of IEEE, the Robotics and Automation Society (RAS), and the Engineering in Medicine and Biology Society (EMBS). He has co-authored more than 50 peer-reviewed scientific publications, three book chapters, and 9 patents. He serves as Associate Editor for IEEE Robotics and Automation Letters, the International Conferences on Rehabilitation Robotics (ICORR), and Biomedical Robotics and Biomechatronics (BIOROB).

Professor Lenzi is one of many faculty members in the College of Engineering who are working on exciting biomedical and clinically related research projects within the Bionic Engineering Lab. “Rather than focusing on the impaired biological function and trying to imitate its mechanics with a non-biological device,” he said, “our research explores non-biomimetic solutions that can build upon the residual, non-impaired abilities of a person while leveraging on the strengths of artificial technologies such as mechanism, sensors, and feedback control.”

Dr. Lenzi’s main research interests include robotics, mechatronics, and rehabilitation medicine with a major emphasis on the design and control of wearable robots for human assistance and rehabilitation. Functioning as the head of the Utah Bionic Leg project with a team at the Bionic Engineering Lab, Lenzi developed an amputee powered prosthesis. The world’s first truly bionic leg uses innovative sensors to determine the user’s intended movements. Real-time input in the prosthetic’s computer processor adapts to the user’s movement, accounting for variability in steps and detecting small differences in the environment by controlling the prosthetic joints. Instead of having to go around obstacles, above-the-knee amputees can cross various obstacles and walk their preferred speed with the assistance of the bionic leg. Essentially, Lenzi and his team created a leg that can think on its own.

Additionally, Lenzi takes interest outside the lab in spending time with his wife and two daughters, playing soccer, riding his Ducati, and playing his Les Paul Studio.