By the time Alfred C. Emery was appointed President of the University of Utah in 1971, the campus had quieted down. Tensions still smoldered, at the University of Utah and elsewhere, but the country and the students had moved on to other interests. The University of Utah, recognizing that the future would be a high-tech one, had already taken steps to insure that the school would be at the forefront of the rapidly expanding world of research and development of computers, medical devices, and other industries. In 1965, Governor Calvin Rampton commissioned a five-year study to determine the best use of almost 600 acres of land that had been declared surplus by Fort Douglas. In 1968, the concept of a research park was first advanced, meeting with the approval of all concerned. In 1970, 320 acres of the Fort Douglas military reservation were accordingly set aside specifically for the creation of a research park.

It was not without conflict in some areas. Vice President Brigham Madsen tried to have a certain part of the acreage set aside for establishment of sorely-needed married student housing, but this idea was met with howls of disapproval from the business community and the governor, and the married student housing had to be built elsewhere.

Others felt that the University's tradition teaching mission was being forgotten in the rush to become a major player in the research field. The mix of teaching, especially in liberal arts and humanities, and scientific programs that support research is to this day a difficult problem faced by University administrators. Still, there were some major successes. Dr. Willem Kolff, the pioneer of artificial organs and limbs, made the University of Utah a household name when the artificial heart he developed was implanted in Dr. Barney Clark, a Seattle dentist. Clark lived for almost three months with the artificial heart. Computer giant Evans and Sutherland, an early resident of research park, became the world leader in computer simulators for aerospace. The University of Utah Hospital became a world leader in treatment of burns and other trauma, and the University supported the Primary Children's Medical Center as well. By the time Dr. Chase Peterson of the University of Utah Medical Center replaced David Gardner in 1983, income from patents and commercial licenses on inventions from the University's faculty amounted to millions of dollars. The only blot on this happy landscape during the 1980s was the claim by two scientists, Pons and Fleischman, that they had discovered a cold fusion process. This was loudly proclaimed as the invention of the decade, but when the two could not reproduce their results, the University was tarred with their brush. 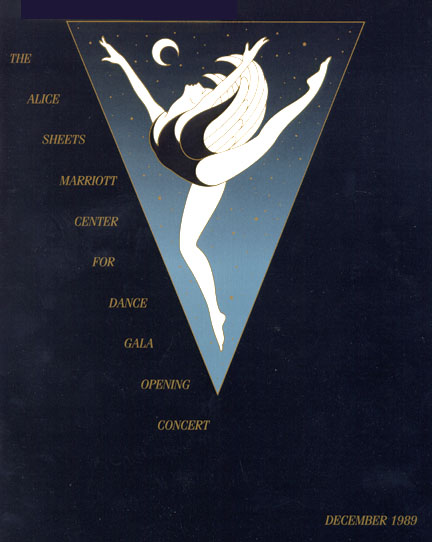 Opening program for
the Alice Sheets
Marriott Center
for Dance

As always, life on campus went on despite the successes and failures of the scientists at Research Park. Additions were constructed on the Chemistry Building and the Alumni House, the Olpin Union Building, and several of the older buildings on President's circle were renovated. The Student Services Building was completed, bringing together under one roof and in one central campus location all departments and services needed by students such as registration and financial aid. The University of Utah women's gymnastics team, under coach Greg Marsden, won an unprecedented six straight national titles from 1981-86. In 1983, the men's basketball team upset Illinois and UCLA before succumbing to eventual NCAA champion North Carolina State in the West Regional semi-finals. Also in 1983, skiing became a coed sport and Utah won the NCAA title–the first of five in the '80s. Student enrollment reached over 25,000, a far cry from the handful of scholars who met in the Pack House in the 1850s. The arts were not neglected either; in 1989 a new dance facility, the Alice Sheets Marriott Center for Dance, was opened, and University dance and drama troupes and musical groups were the envy of the entire region. By the dawn of the last decade of the millennium, the University of Utah had become the flagship of Utah's higher education system, a school that welcome the new age with pride and confidence.