Dr. Willem Johan Kolff was known as the “Father of Artificial Organs.”  He became internationally known in 1957, when he began working on the total artificial heart at the Cleveland Clinic in Ohio, but his contributions to the field of artificial organs and to the betterment of the lives of millions of people began long before that time.

Born February 14, 1911, in Leyden, The Netherlands, Dr. Kolff obtained his M.D. at Leyden Medical School, and went to the University of Groningen for his residency in medicine. He started working on the artificial kidney in 1939, and became the first internist at a small hospital in Kampen, where he continued the work on the artificial kidney even after the Germans occupied Holland in 1940.   The prototype for his kidney dialysis machine was made from sausage casings and a water pump salvaged from an auto.   The rotating drum kidney was developed in 1941, and by 1955 the twin-coil kidney had led to the possibility of dialysis worldwide. Work on the heart-lung machines began in 1948, and the first membrane oxygenators were used successfully in patients in 1955.

Dr. Kolff and his wife Janke had five children who were all born in the Netherlands. They immigrated to the United States in 1950. Dr. Kolff worked in the Research Department and the Department of Surgery of the Cleveland Clinic, and became a US citizen in 1956.   He worked on the artificial kidney, the heart lung machine, and invented the total artificial heart in 1957. He became Scientific Director of Cleveland's Artificial Organ program, then moved to the University of Utah in 1967 to direct the Division of Artificial Organs and the Institute for Biomedical Engineering at the University of Utah in Salt Lake City.  Dr. Kolff came to the University of Utah for the freedom of research that it offered, but his presence created a benefit that the University still enjoys today.  Around him coalesced a galaxy of stars of biomedical research who came to Utah to work with Dr. Kolff on his cutting-edge devices and methods.

Dr. Kolff received more than a hundred awards, among these the prestigious Japan Prize in 1986, and the Albert Lasker Award for Clinical Medical Research  for his work on the artificial kidney and dialysis in 2002.  He was inducted into the Inventors Hall of Fame in 1985, and in 1990, Life magazine named him one of the most important Americans of the 20 th century. He published numerous books and more than six hundred articles, and was awarded a number of honorary degrees by grateful institutions. He was also active in social issues such as abortion rights and nuclear weapon protests, and was always interested in nature and art.

Starting in 1989, the Special Collections Department of the J. Willard Marriott Library, University of Utah, was honored to be chosen as the repository for Dr. Kolff's extensive archives, which document his life and career.  These include photographs, files, film, and his many books and articles.  These files are available for research by the public by contacting the Special Collections Department at (801) 581-8863.

Click to view Dr. Kolff's collection at the Marriott Library 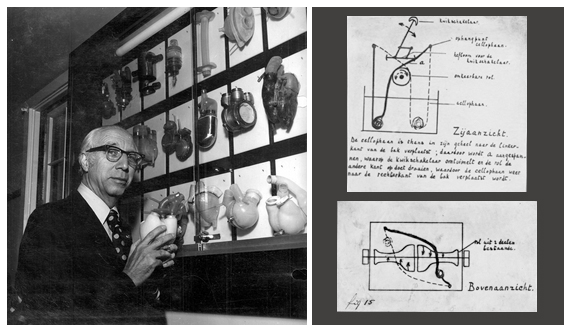