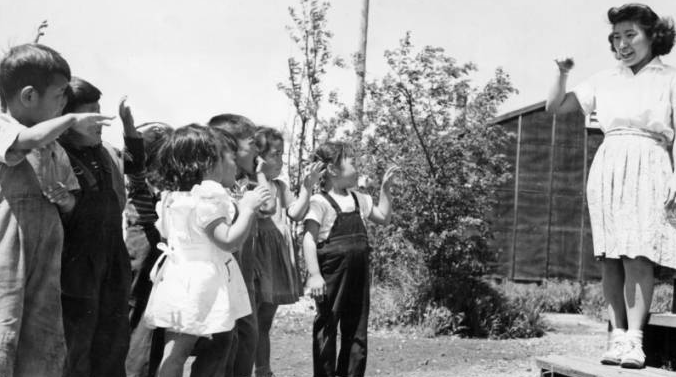 Following the Japanese attack on Pearl Harbor in December 1941, the United States was gripped by war hysteria. This was especially strong along the Pacific coast of the U.S., where residents feared more Japanese attacks on their cities, homes, and businesses. Leaders in California, Oregon, and Washington, demanded that the residents of Japanese ancestry be removed from their homes along the coast and relocated in isolated inland areas. As a result of this pressure, on February 19, 1942, President Roosevelt signed Executive Order 9066, which resulted in the forcible internment of 120,000 people of Japanese ancestry. More than two-thirds of those interned under the Executive Order were citizens of the United States, and none had ever shown any disloyalty. The War Relocation Authority was created to administer the assembly centers, relocation centers, and internment camps, and relocation of Japanese-Americans began in April 1942. Internment camps were scattered all over the interior West, in isolated desert areas of Arizona, California, Utah, Idaho, Colorado, and Wyoming, where Japanese-Americans were forced to carry on their lives under harsh conditions. Executive Order 9066 was rescinded by President Roosevelt in 1944, and the last of the camps was closed in March, 1946.

The photographs in this exhibit represent a sampling of the available resources in the Special Collections Department, J. Willard Marriott Library, University of Utah, and other private collections, which were generously lent for this exhibit.