The end of the 19th century found the newly re-christened University of Utah on the verge of great changes, both in size and location. In 1894, the U.S. Congress granted the University sixty acres of land on the east bench of Salt Lake City, land that had been part of Fort Douglas since it was founded in 1862. With the vanishing of the frontier, military posts such as Fort Douglas were considered surplus to the Army's needs. James E. Talmage replaced acting president

Joseph T. Kingsbury as President of the University in 1894, and served for three years. In 1897, Dr. Kingsbury was once again appointed as President, this time in his own right. Kingsbury would guide the school for the next two decades. During this period the University faced yet another threat to its existence; at the Constitutional Convention in 1895, legislators introduced a motion that would have closed the University of Utah and consolidated it with the State Agricultural College in Logan. The motion was defeated, and an article was placed in the state's constitution that established two separate schools.

In 1896, Utah became a state. Two years later, the Board of Regents voted to move the school to the new east bench location; the next year, the state legislature appropriated $200,000 for buildings on the new campus. Utah architect Richard K. A. Kletting, who designed the original Saltair Resort and the Utah State Capitol Building, was commissioned to create a plan for the campus. Mr. Lyman's engineering students were put to work surveying the grounds and preparing a map of the new location. Students were also glad to help landscape the campus by planting trees on Arbor Day; this became a campus tradition that continued for a number of years.  Four buildings were planned, for Physical Science, Liberal Arts, a Normal school, and a Museum. The appropriation only covered the first three, and they were completed by the time registration opened on October 1, 1900.  On December 19, 1901, the Physical Science building was partially destroyed in a fire, but quick action by student, professors, and a regiment of soldiers from Fort Douglas saved books, furnishings, football uniforms, and much else from the flames. The building was re-built and re-opened by the start of the 1902-1903 school year. In 1904, the campus continued to grow when a further 32 acres were obtained from Fort Douglas. Meanwhile, enrollment at the University had been growing as well. In 1900 there were 183 students; within a decade this had increased to over 1,500.

To respond to this increase, and in the face of competition for students from the Agricultural College in Logan, where attendance was essentially free, the Legislature increased the University's appropriation. Upon his death in 1900, Dr. John R. Park bequeathed his entire fortune, plus his library, to the University.  Increasing numbers of students led the administration of the University to establish entrance requirements, first by the School of Arts and Sciences, and soon after for the whole University. The State School of Mines was established in 1901, and in 1905, a two-year Medical program was begun, with Dr. Ralph V. Chamberlin (who later wrote a comprehensive history of the University), as Dean. The first professionally trained librarian, Esther H. Nelson, was appointed in 1906. After intense debate among the faculty and adminstrators, the University decided that it would offer a Master's Degree program, in 1908.  In 1909, the name of the Normal school was changed to the State School of Education, and the Law School was formally established in 1913, along with the Department of Mining and Metallurgical Research and the U.S. Bureau of Mines Experiment Station.  The new administration building, later named in honor of Dr. Park, was completed in 1914, as were the Civil Engineering, Mechanics, and Gymnasium buildings. The library, now comprised of almost 13,000 volumes, was moved to the Park Building. With the growth of the student body came increases in student organizations and activities. The Associated Students of the University of Utah, after an earlier false start, was established in 1901. The Varsity Glee Club, established in the 1890s, was joined by a Girls Glee Club in 1902. Other music clubs followed; there were enough that they were consolidated into a Musical Society in 1908. Debating societies, literary clubs, and other student organizations flourished on the new campus. A number of fraternities and professional societies marked their beginnings during this period, and the first Junior Prom was held in 1905.    Although there was great interest in athletics, funds were not forthcoming, and the University suffered a series of embarrassing defeats at the hands of the Salt Lake High School football team. In May, 1900, a football coach was hired, and David O. McKay, a future president of the L.D.S. church, was one of the star players on the revitalized team. The first gymnasium built for that purpose was opened in 1906, and the track, basketball, and baseball teams were put on a sound footing. The formidable Maud May Babcock made sure that women were not neglected, when she started her physical culture classes for women during this period. A symbol of the University, the “block U” on the hillside north of the campus, was built in 1907, and that same year, the first yearbook, THE UTONIAN, was published.

But not all the news from the University of Utah cast the school in a positive light. In 1914, a controversy over academic freedom began that would shake the University to its foundations. Four faculty members were demoted or not rehired because they allowed a graduation speaker to criticize the influence of the L.D.S. church on the University. 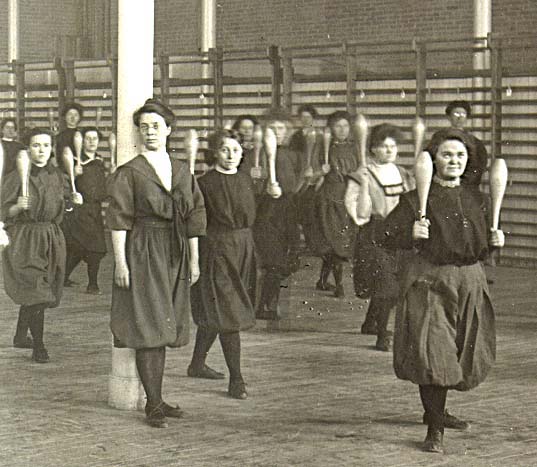 Ms. Babcock (leaning on pole)
and her physical culture class

The students and faculty mobilized, and protests and meetings were held. The University of Utah was the subject of the first investigation by the newly founded American Association of University Professors, which found the administration guilty of firing or demoting faculty members for trivial causes. By the time the controversy was finally resolved in 1915, twenty-one faculty members--one-third of the faculty--had resigned in protest, including Byron Cummings, the first Dean of Arts and Sciences. The controversy also led to the resignation of President Joseph T. Kingsbury in January 1916. From bright beginnings at the end of the 19th century, the University faced an uncertain future in the first years of the 20th century.