In 1964, James C. Fletcher was inaugurated as the eighth president of the University of Utah. Even before he took office, the school had embarked on a massive building program that would change the shape of the campus forever. By 1967, there were over $61million worth of building projects underway, including the Marriott Library, the Mines Building, the Social and Behavioral Sciences Building, the Nursing building, the Pioneer Memorial Theater, the Bookstore, the College of Law Building, and the Special Events Center. Remodeling was taking place in Orson Spencer Hall, the Medical Student Housing towers, and other older buildings. In addition, there were major landscaping projects on campus and many roads were being either torn up or improved. No wonder, then that many students and faculty complained that the University of Utah campus consisted of “dirt, rocks, and mud.”

Many building projects, coupled with the rapid growth in enrollment as the first waves of the baby-boom generation entered the University, created an atmosphere of extreme tension that was to plague Fletcher's administration as President. As the University administration tried to reach out beyond the traditional “ivory tower” academic structure to embrace other members of the community, some members of the faculty objected to what they saw as the corruption of the university ideal. The administration decided to close Carlson Hall, a women's residence, and assign that space to the Law School. As the Administrative Vice- President, the Dean of the Law School, and the architects met in the dining room of Carlson Hall to finalize the plans, suddenly the door opened and in marched a silent procession of women, dressed in flowing robes, with lighted candles. The last two women in the ghostly procession carried a portrait of Mrs. Carlson, draped in black.

But silent protesters were not the only problem that Dr. Fletcher had to face. By the late 1960s, protests against the Vietnam War were beginning to take place on campuses all across the nation, and the University of Utah was no exception. A branch of the radical Students for a Democratic Society was organized in 1968, and immediately began trying to disrupt campus life. In October 1969, several thousand students paraded from campus to the Federal Building in downtown Salt Lake City to protest the war.

But these activities were nothing compared to what happened after the invasion of Cambodia in the spring of 1970. After the deaths of four students at Kent State University in Ohio on May 4, 1970, students rioted at the University of Utah. Classes were disrupted, the Daily Utah Chronicle offices were occupied, and the ROTC building was fire-bombed. On May 6, four thousand students gathered for a rally south of the Union Building. During the rally, fire broke out in an abandoned World War II building near the Union. The building was no great loss, considering it saved the costs of razing it, but a short while later 800 students marched into the Park Building and sat down. Although most left when they were told they would be suspended from school, others stayed and were arrested later that day. Finally, the National Guard headquarters building, just south of campus, was bombed early the next morning. All these events left a lasting impression; to this day, campus legend holds that the hilly landscaping around the Union building was put in place to deny rioting students a place to assemble, and that the sidewalks on campus were purposely made wide enough to accomodate an army truck. 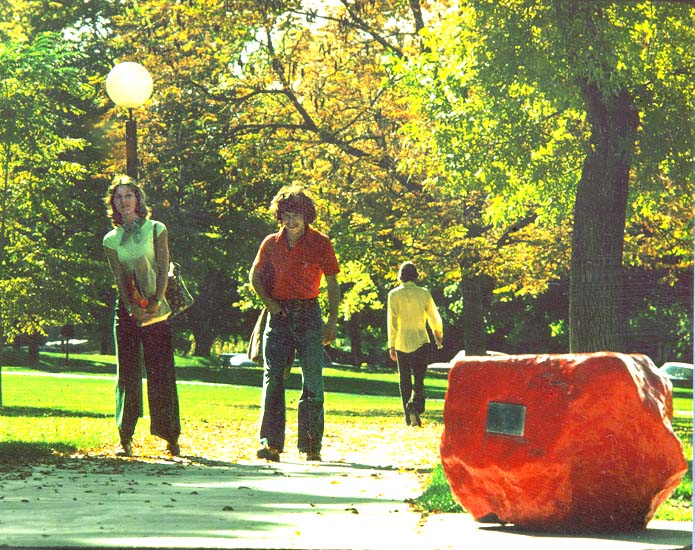 These were not the only controversies on campus--students protested tuition increases, the establishment of a parking system, and the lack of married student housing--and the University for the first time created its own police force. But despite the protests and the bombings and the tensions, for the majority of students, faculty, and staff, life at the University of Utah went on. The football team went to the Liberty Bowl in 1964, and defeated the University of West Virginia 34-6. In 1966, the Ute basketball team won the Western Athletic Conference title, while the men's wrestling team took home the title in 1969. The Utah men's swim team dominated the WAC for most of the decade, winning eight conference championships. In 1967, the Department of Architecture became the Graduate School of Architecture. Notable celebrities such as singers Harry Belafonte and Ella Fitzgerald came to perform at the University of Utah. Other speakers reflected the turbulent times; civil rights leaders Dick Gregory and Julian Bond; political candidates Ted Kennedy and Hubert Humphrey; activists such as Timothy Leary, Jerry Rubin, and Alan Ginsberg; and avant garde idol Andy Warhol all appeared in venues at the University during the 1960s. By the time the turbeulent '60s had given way to the “Me Generation” 1970s, the University of Utah had begun to gain international recognition as a center for research in fields that would affect the lives of people far outside the campus on the hill.