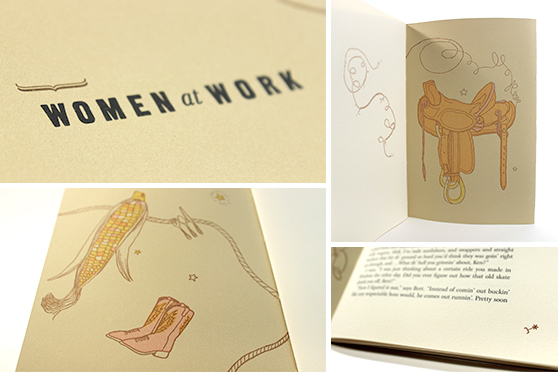 Wo/Men at Work contains an introductory essay by Matthew Basso and Andrew Farnsworth; Ralph Powell’s story about the rodeo, “Everything’s Dangerous,” from the Federal Writer’s Project collection Men at Work (forthcoming from University of Utah Press, edited by Matthew Basso); and a contemporary response by Judy Blunt entitled “Cooking from Scratch,” in which the author, who grew up on a Montana ranch, explores the notion of “women’s work.” This unique, 32-page, W-fold pamphlet is printed on Rives Heavyweight and BFK papers.

The production of Wo/Men at Work furthers its investigation of American labor through physical practice and through the integration of cutting-edge and antiquated technologies. Photosensitive polymer plates created from digital files are employed alongside letterpress printing & hand bookbinding —processes contemporaneous with those used during the Men at Work era. The body typeface is a version of Fairfield, released in 1939 and designed for the Linotype machine. Additional typefaces, also evocative of 1930s and ’40s printshop vernacular, are Hamilton, a revival of a popular 19th century wood type; Franklin Gothic, a workhorse sans serif found in printshops across America; and Cheltenham Italic, a ubiquitous early 20th century serif design.